David “Waxer” Tipton was raised near Papakōlea on O’ahu where he was immersed in Hawaiian culture and tradition. His parent’s deep commitment to the Lord combined with his local upbringing stirred within him a great love for the Lord and the Hawaiian people. He grew up surfing with his dad and was a part of the surf culture where his surfing buddies gave him the nickname “Waxer”.

While in college, Waxer’s love of surfing helped him to reach out to fellow surfers and begin the “Surfers for Christ” ministry. Soon after, he was approached and asked to come on staff at a local church as a youth pastor. He studied at San Diego State University and Point Loma Nazarene College and obtained a Masters degree from Fuller Theological Seminary and completed post-graduate work at Gordon-Conwell Theological Seminary, eventually obtaining his Doctorate.

Waxer has pastored churches in California (San Diego, San Clemente, Santa Barbara) and Hawai’i on the islands of Moloka’i and O’ahu. He is married to Cindy and they are proud parents of two kolohe, furry, four-legged children, Hayden and Mango.

Waxer and Cindy founded One Love Ministries in 2006 with a God-loving group of college students. Weekly celebrations are held at our main Koinonia Hale (K-Hale) in Kaka’ako and also at our Windward campus. Discipleship, connecting with our community, and compassionate outreach in Hawai’i and the world are our passions. 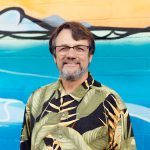